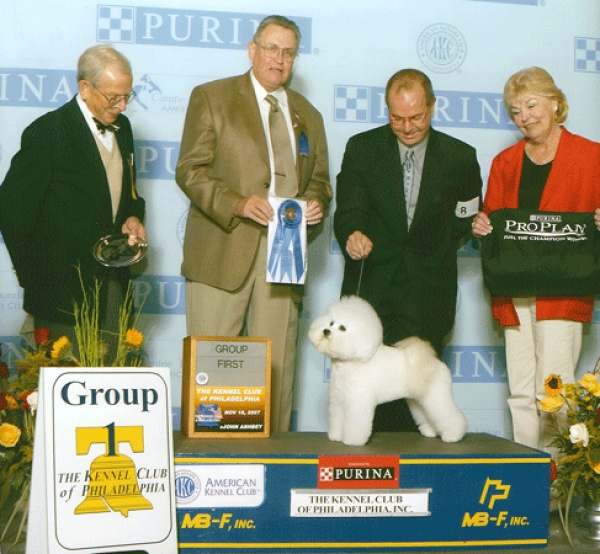 What can you say about Pearl: she won BOS in sweeps in her first show at 6months.Went on to become

After winning AOM at Eukanuba national dog show: she loves him too much. Pearl has been a delight to have as a show dog, She was shown exclusively by
Mr Anibal Faria, professional handler and did everything that was asked of her. Her reach and drive was described as perfection in movement.
Pearls advertising and Photographs were by Lisa Croft Elliot. Pearl was invited to Crufts 2005, 2006 and the World Show 2006 in Buenos Aires Argentina.

On Thanksgiving day 2007, Pearl was on national Television in the National Dog Show and received a group 4 placement. The following day she won the group in her last competitive show.

View the embedded image gallery online at:
https://whitebredbichons.com/our-dogs/the-girls/item/82-pearl#sigProIdc6d274ff5e
back to top

Use these drop down lists to select a specific girl by their title or name: