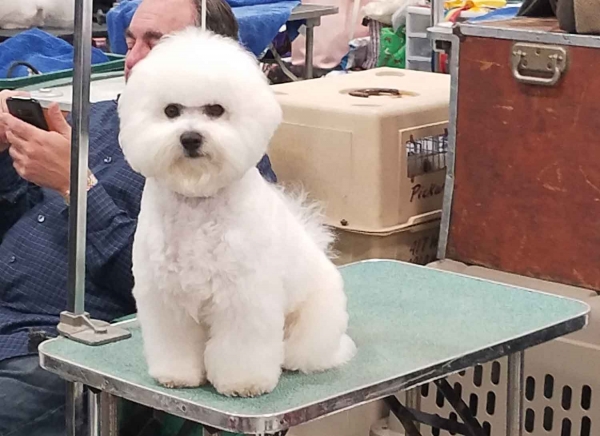 Our boy Shad Jr. aka Junior, was awarded BEST Pup in Sweeps and Best of Winners for a Major at the the March Madness Weekend. Starting his show career on his first weekend with 5 points including a major.
and our puppy girl Savannah, That's Whitebred's Summer Soltice, owned by Joanne and Steve Verba also had a great start to her show career by winning Best Op in Puppy Sweeps to Junior and also receiving her !st Major this same weekend, Congrats to these two Great pups, who we think will have an outstanding show career.
Also ending his show career with 5 Select dog wins is our handsome GCH WHitebreds A Diamond is Forever owned by Joni and Ken freedman and CH Luxury Love Dacquiri being awarded Select all 5 shows and starting her quest for her Grand Championship and Specials campaign. This May Dasha FINISHED her grandchampion ship winning Best of Breed at Trenton Kennel Club.

View the embedded image gallery online at:
https://whitebredbichons.com/activities/news/item/305-specialty-wins-pups-stand-out-in-march-madness-weekend#sigProId63342ca193
More in this category: « Our Wins at Westminister Dog Show Important Free Webinar about Important Info to Keep your Pets Healthy »
back to top